Riot Against Riot is now available on iTune, Amazon.com, Spotify, Shezam and almost all other online music stores. 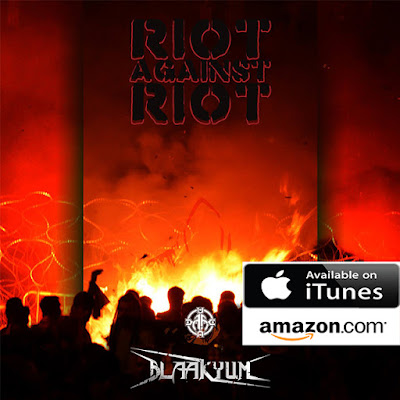 We released our single last week, hope you enjoy it

Our Frontman's feelings about the upcoming tour with Onslaught...

Our frontman Bassem Deaibess had an emotional moment when he received the news that Blaakyum will be supporting Onslaught in their 2016 Mercenaries of Thrash The Full Force tour... Here is what he had to say through his personal facebook page:

It is rather embarrassing to admit that I only discovered Onslaught in 2013... And that is a shame. But as their guitarist Nige told me when I admitted this to him in an online conversation back then, better late than never... Since the second my ears heard the following words, "Spitting blood in the face of god" and the mayhem that followed it, I have been hooked and the spell has never been lifted...
I am cursed to love this band and never stop being amazed at how freshly modern yet utterly Thrashy they sound. If anyone has followed me since 2013, you could see that I have on several occasions stated that Killing Peace is the one album I would listen to from start to end without skipping a single track.
Ever since that discovery, Onslaught became a band I relate to in every aspect. Usually when you are young, you tend to be fanatic about bands you like for various reasons, but rarely is maturity a part of it. But when you are well into your middle adult age, if you then feel towards a band the same way you felt towards Metallica back in the 80s or any such band that we fell for when we were teens, then you know that you are fond of this band because it kicks ass. My mature love for Onslaught seems to have no end.
Why this long introduction you say? Because I never imagined, for the life of me, that at any point soon, something like this would happen. I mean in 2013 we performed at MetalDays and Onslaught was on the bill, and we made it clear that we performed in the same festival, we wanted to have our name next to those UK-facemelting-Skullcrushing-Thrasher giants. But to now realise that we will be touring with them, well... words cannot truly describe how I feel.
I think I can be content that I have two huge highlights in my life so far: performing with one of my Idols, Zak Stevens (Vocalist of Savatage) ), when opening for Circle II Circle, and now touring with Onslaught (check them out at Onslaught official).
After years and years of struggling to perform, to write Metal music, to try to live the broken dream of every Middle Eastern Metal musician, all this has paid off... The journey has just began, and I can never be more grateful for all the support we have received from our local Lebanese scene (despite the haters) especially from Metal Bell Magazine, YMeventand Rockring, and the support and encouragement we received in Wacken Open Air's WOA Metal Battle, but most of all, the people whom Blaakyum will always be indebted to: Samer Deaibess, Dany Deaïbessand the incredible Dream Maker, our manager Lina Khatib
WE ARE the Middle Eastern Thrash Mercenaries \m/
See you on the road and check out Mors Principium Est from Finland andNO RETURN from France, whom we will also have the honour to support on the Thrash Mercenaries Tour 2016
Details at THRASH MERCENARIES TOUR 2016 / THE FULL FORCE With ONSLAUGHT and more...