Blaakyum had a blast in Metaldays, regardless the 38 degree heat, we enjoyed our fans who made it despite the beach temptation and the heat, and we were touched by the amount of support we received. This year Metaldays has surpassed all previous MetalCamp editions, being much more organised, and the staff and volunteers being so sweet and supportive, for 7 days we spent the time of our lives because of the nice people and great atmosphere... Once we are back in Lebanon we will have a detailed statement, but for now all we can think of is that we definitely will be back there one day \m/
Posted by Sir Black at 2:11 pm No comments: 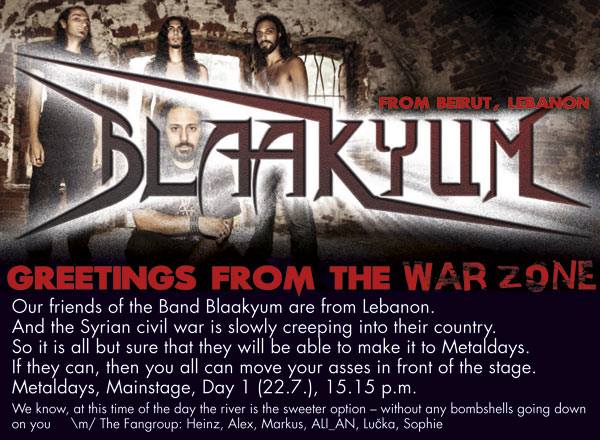 Blaakyum is looking forward to perform once again in Tolmin-Slovenia at Metaldays (previously MetalCamp).
But during the last two months things started going crazy in Lebanon. From political crisis of the ruling farm so called "Government", then the Hizbolla reckless involvement in the Syrian civil war, to the clashes in Tripoli, culminating with the terrorist war against our Army in the south by Salafist Terrorist Jihadists. And finally ending with the bomb exploding in the southern suburbs of Beirut! All these issues has made our effort to attend MetalDays so hard. First on the financial level, where we as much as the rest of the country are facing a bit of set back in our income, but most importantly through our visa applications and we all know how hard it is for us to have visas! In our case we are probably going to have our visas but we have no idea if we will have it on time to be able to travel. Needless to say that Metal music not only not supported in Lebanon but actually is under constant attack from religious institutions, especially Christian ones, from the Government and from society, so we felt that we were on our own, Just us the band and the Metalheads and our loyal fans.
From within this depressing situation, something happened that lifted our spirit up enormously. We have witnessed the support of people who never saw us, never met us but only heard our music. Such a global show of support is in the essences of what Metal is and why Metalheads are proud to belong to this global Culture, yes Metal is one of the few cultures that bypass borders, religions, political affiliations and all what makes us hate each other.
So we would like to thank Pawel Wojcik from Poland, who has volunteered to be with us, and to help us reach Slovenia, while doing this on the expenses of his job and comfort.
We would like to thank Heinz Szolarz from Austria, who have taken the time to organise a campaign to help us, in the good case that we make it to Slovenia, get as many people to support us, Heinz volunteered to organise our Fangroup in the Couch Surfing Community, we didn't even ask him to do it. Such solidarity and good will prove that no matter what the politicians and media is trying to brainwash us into thinking that humans have become cruel and hateful, when you see people around the world who never saw you, never met you are helping you without you even asking for it, it makes you feel that in reality this world is still great, and life is greater.
But it didn't stop here, Today MetalDays decided to show us their support as well by posting the flyer Heinz did on their Official facebook Page. I guess that was arranged by our management and the Page administrators, but the band had no idea so when we saw that, hell that gave us so much motivation, for that THANK YOU MetalDays, Thank you Heinz and Thank you Pawel, We hope we can make it and give a great show to thank you!

Metal On \m/
Bassem Deaibess
From Blaakyum
Posted by Sir Black at 9:17 pm No comments: