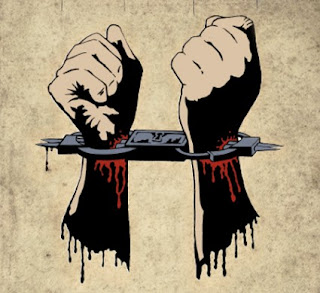 This post will be dedicated to the Lebanese Metal Scene. But anyone is welcome to give us feed back:

We have been witnessing a rise in our scene lately, ironically by having much less gigs and concerts than before, but having them on a very good standard, and always rising up with the standard. As well we have witnessed many more international acts that have been brought by more than one promoter/organiser. These big names are:

Add to this the many high quality events happening every now and then.

Now that we did mention the good parts, how about we try to look at two major problems:

1. The lack of a proper mid-sized venue
2. The bad (I insist on bad) competition and the rivalry.

I will name things out right, for it is time to stop the "politically correct" behaviour and get things fucking MOVING.

1. We DO NOT HAVE A VENUE. Namely the only indoor venue available is Tantra-Kaslik, and that proved not too good for hosting international bands since it's capacity is limited to 1000 attendant max and if more came it will become not always a pleasant experience. I can't see a good solution for this except keeping our big events in summer, which would result in a rush of events and eventually having many not able to attend all of them due to the fact that most metalheads can't pay such an amount of money in such a period of time, that already is a spend frenzy time.
My suggestion as an individual to this, is calling upon RockRing specially since they are the most active, and on all metalheads to put a collaborated effort to raise funds and build our own damn venue... Sounds impossible? maybe, but I know this, NOTHING is impossible.

2. And the most important issue. It is a shame to see the Lebanese USUAL fighting for prestige and recognition affect the Metal scene. Yes we are Lebanese, but we are the critical eye (supposedly) of this country. So it is sad to see that Mr. Jyhad El Murr whom I see as the big brother of Rock and Metal in Lebanon, being not too pleased because a competitor radio station supported RockRing event. I can understand that he has been among the first to support Rock, in his stations way before Radio One ever accepted Rock, but fact is, till now Rock market is not big enough to fight over. This is one field that doesn't have to nor need nor should it be taken in a competitive way. My hope is that when a rock event happens, competitive Media will unite there as well, as sister Radio and TV stations not as competitors.

This is my cry out to all Metalheads and Metal supporter, this scene has a future, let us not throw it away this time. Later on we should, when the time is suitable, have some civil action towards the ban of some bands and towards our right of freedom to listen to whatever we chose to listen to away from the social and specially the venomous RELIGIOUS influences.

And finally, a huge Hail to all Lebanese Metalheads... we have been fought and unjustly prejudged and Judged... now is the time to rise, and now is the time to claim our rights as humans and more importantly as appreciative of one of the most artistic and expressive forms of Art.

Bassem Deaibess
Posted by Sir Black at 8:58 am No comments:

Untile we are up

Have no mistakes this IS the official Blaakyum website till now. But we are working on a proper website that is a bit more than a blog :P

Until then, we have decided to include some adds on this blog to generate more income for the band, since we all know that being in a Metal band means you might never become rich. Not that the aim is to become rich, we simply thought this could boost a bit our already little income generated from shows, to support us in recoding our album and buying new equipment.

But if some of you feels this is being a bit too much of a "commercialisation" of our band, we would like you to voice that out. To many complains WILL result in removing the adds.

Thank you for supporting Blaakyum.
Posted by Sir Black at 8:54 am No comments: