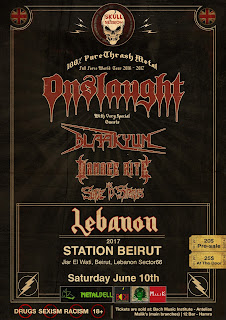 We have been working hard lately to finalise the preparation for Onslaught's performance in Lebanon, This year's Skull Session will be very special, and it will be the first live performance for Blaakyum since their Europe tour supporting British Veteran Thrashers ONSLAUGHT, alongside Damage Rite and Slave to Sirens.
<-- 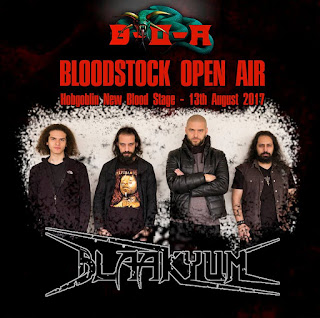 Blaakyum have been also announced to perform at BloodStock 2017 on the Hobgoblin New Blood Stage on the 13th of August making this the first major UK festival they will take part in. --> 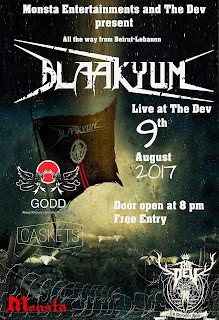 Also as a warm-up event, for BloodStock Blaakyum will be hitting London's Metal centre: Camden Town at the DEV on the 9th of August supported by local act Caskets, and our own Alexy Khoury in his project GODD -->

MORE DATES will be announced soon, so keep an eye on this space.

Posted by Blaakyum at 2:56 am No comments: