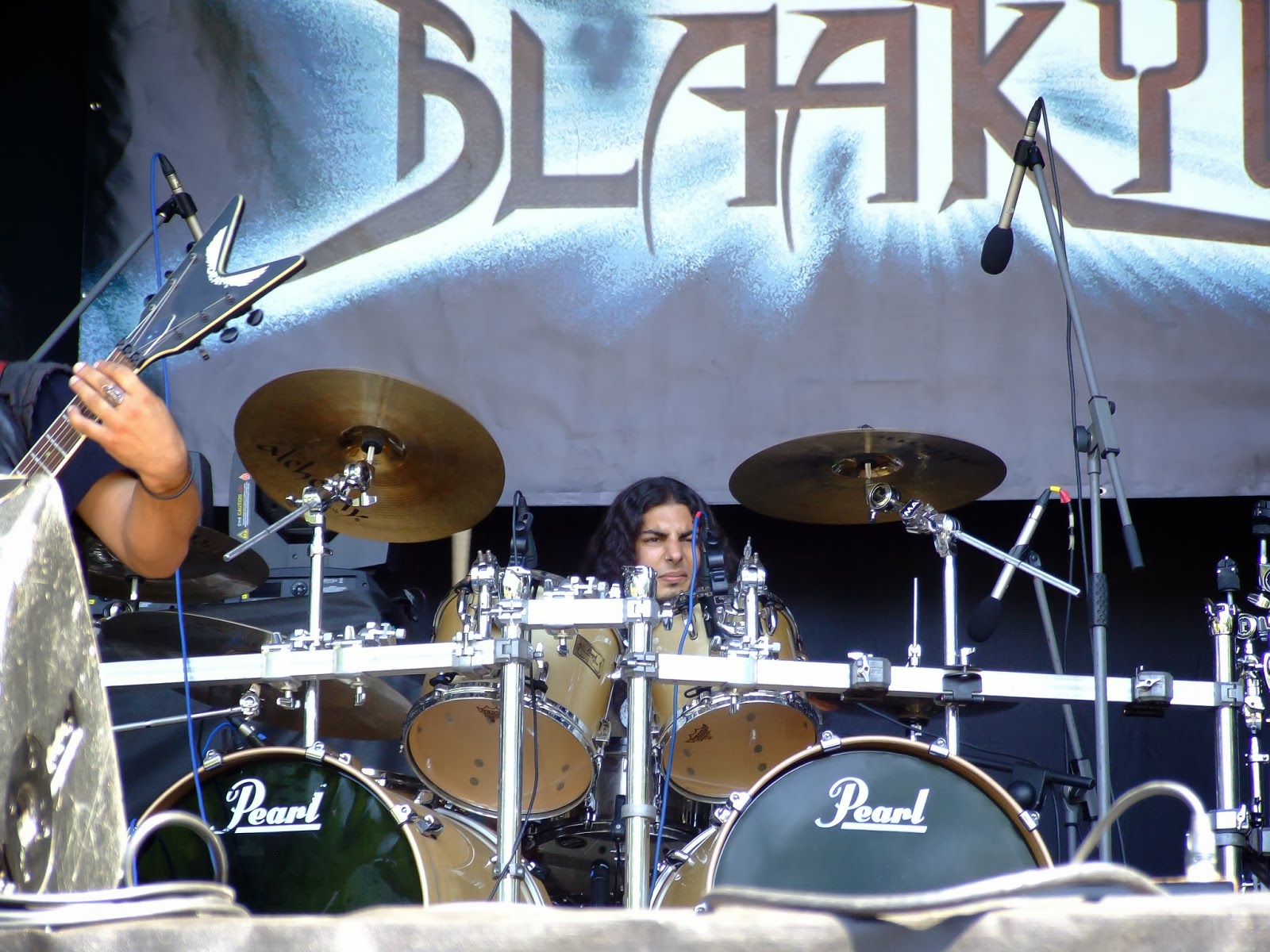 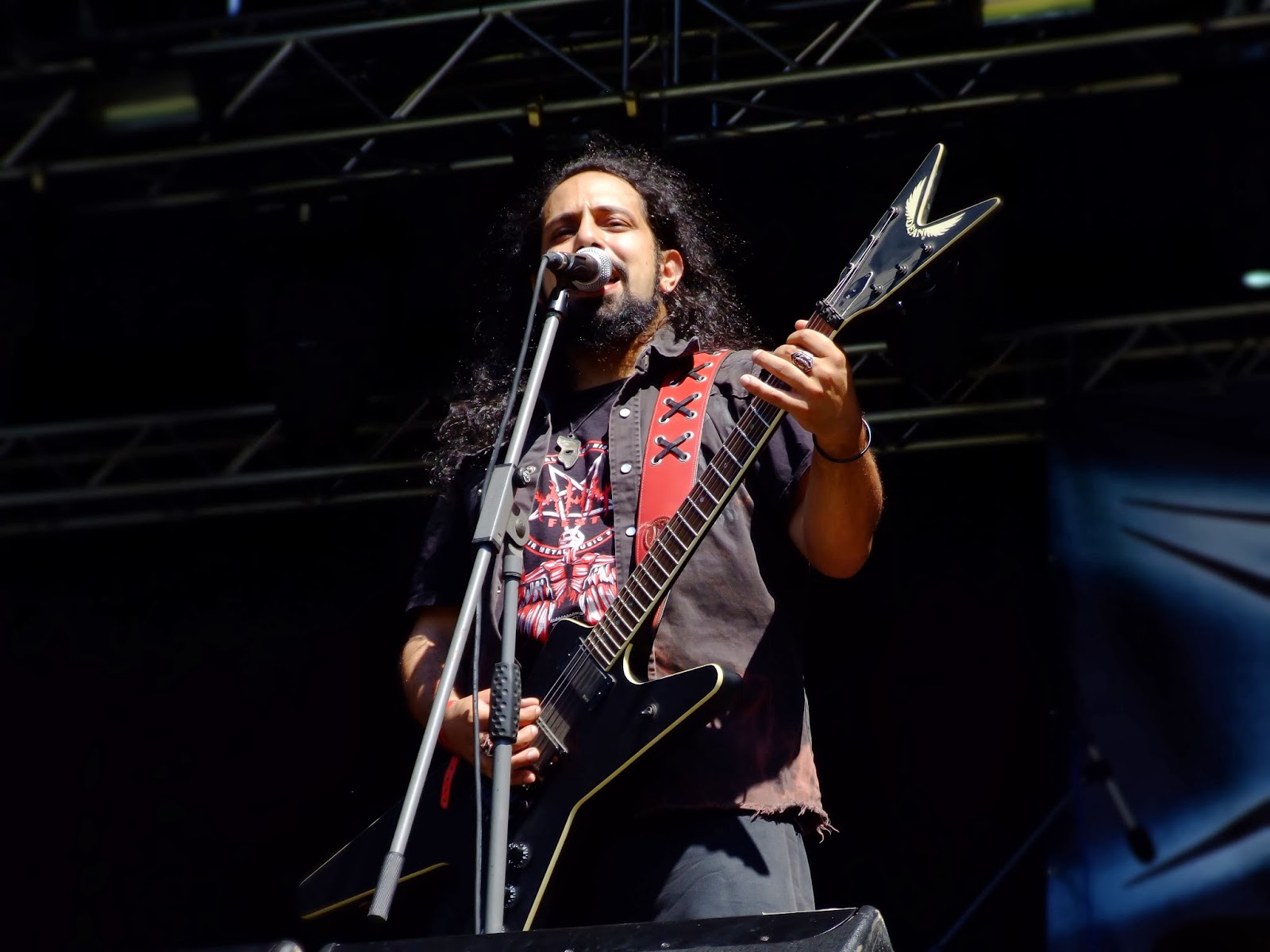 The MetalDays 2013 in Tolmin Slovenia experience was one of the most important steps in the band's history. Not only is it our first experience on the main stage of a major festival, with all the challenges of having to play in a huge festival that spreads over seven days, a camping area far away from main
stage and a crushing heat that sends almost everyone to the beach side which is even farther away from the main stage, but add to all of this the fact that Blaakyum had to prove that it has earned its place on a main stage opening for huge acts such as Overkill, In Flames, and sharing a festival with such bands as Metal Church, Annihilator, Iced Earth, Samael, Meshugga, Hypocrisy, Onslaught, King Diamond, Vicious Rumours, Wintersun, Powerwolf, and Candlemass. 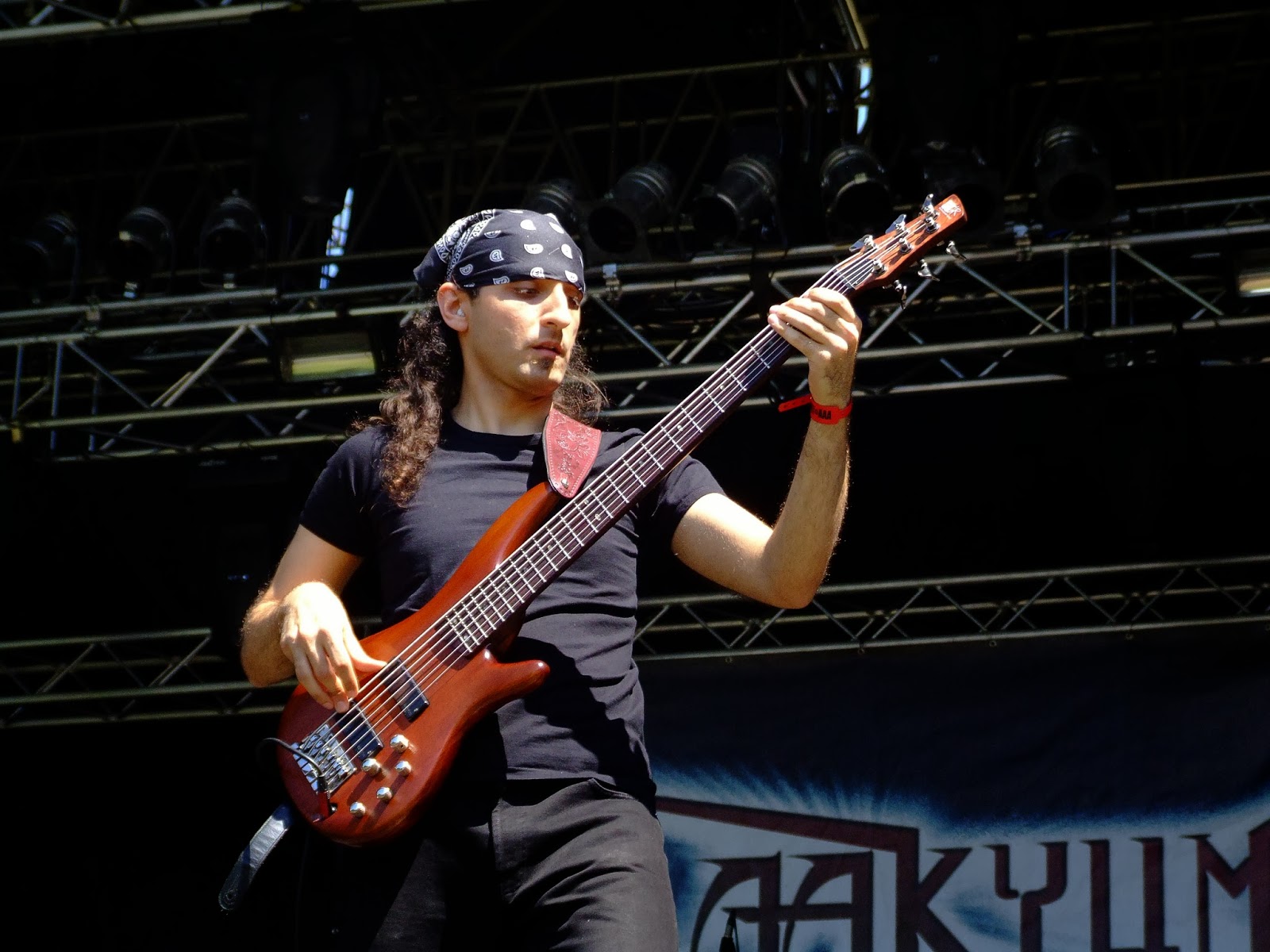 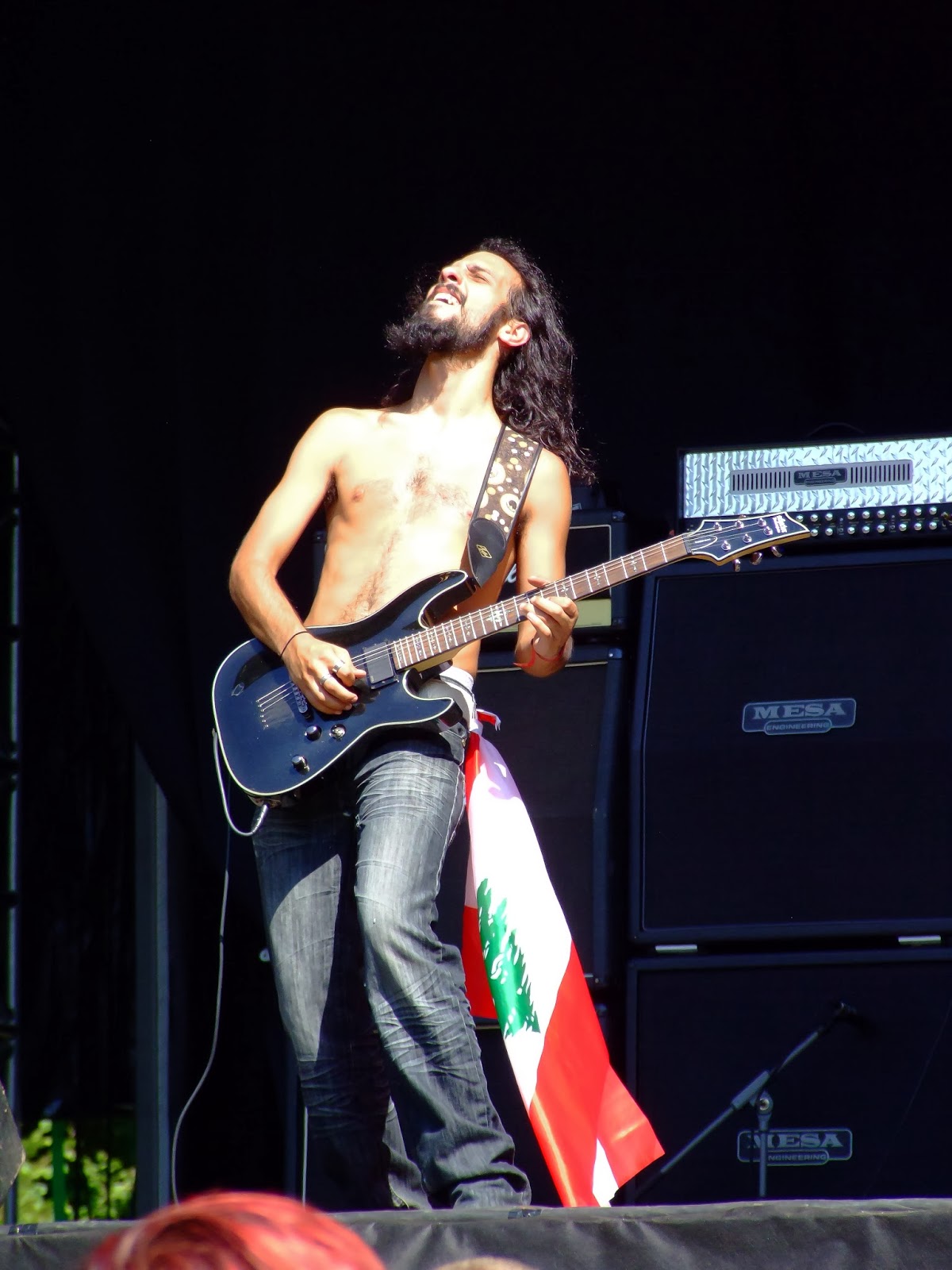 And we sure hope to have met the minimum required expectation of the organisers, and of the people who took the trouble of checking us out as a newcomer.
But the fact remains that there was something magical about this festival, for not only is it a 7 days long Rock'n'Roll heaven alongside fellow metallers, headbangers, all full of extreme humour, fun, sweetness and brotherhood, but also the organisers, staff, volunteers, even band members and fans being extremely supportive and warm-hearted.
I have learned a bit about the history of the festival since it started in 2004 as a two days festival, evolving to three days, then four days then six days before finally becoming a full week festival. But that is not the interesting part; the interesting part is how the festival was not very much welcomed by the local Tolminians at the start. And this is what we would like to put on here:
The festival organising company (or individuals at the start) needed to rent the land where the festival is to be held, and the fact that the festival area needs to be so huge meant that it cannot be done on a singly owned piece of land, so the organisers need the consensus of all the land owners. as commonly seen in Lebanon, many if not most of the inhabitants of Tolmin were not fond of Metal, the stereotype image of Metalheads being that of marginal, stinky, untalented, retarded junkies; I do not know if they associated them with Satanism (I doubt it though), but that image made the people of Tolmin not really happy about such a festival being held at their town, in fact, many, if not most, of the land owners refused to give their lands to the organisers to rent! Till this day if you ever go to the festival you will see one or two very small parts of land fenced with a sign stating "keep out private property". As I have been told, these are few who still refuse to rent their land to the festival. Of course the owners were able to rent barely enough space for the first few editions of the festival, which as I mentioned were just two days or three days long. Despite their "unusual" appearance, Metalheads were friendly folks, probably and surely they went into town to buy some stuff or to eat (even though the festival has (and sure had) a lot of very tasty food and great variety of drinks with affordable prices) like they still do. When we were there we saw many metalheads chose to venture into town and enjoy some lovely meals and drinks in its various cosy restaurants and pubs. It is evident that the bar, restaurant, pub and supermarket owners realised that despite their leather garments, unusual tattoos, piercings, and eccentric looks, those Metalheads were polite, funny, and unlike the stereotypic image that they had in mind. As well the town folks noticed that the organisers and attendees were very environmental friendly, clean, and did not litter, or do any damage to nature. Indeed the organisers have a very cunning policy of selling drinks with plastic cups for one extra Euro (mandatory) and then the costumer would get his Euro back once he returns back the plastic cup, but that is not all; there is a special kiosk for volunteers who would like to help cleaning up, and you would be surprised to see how many would actually go there, get a bag and start gathering plastic cups found on the floor, in exchange for some free meal coupons if memory serves well . Year after year the citizens of Tolmin slowly started realising that this Metal Festival actually greets nice people, and they rarely ever saw anyone on drugs or wasted, maybe at most drunk; one of the pub owners even told me that "unlike other music festivals like electronic ones we realised these rockers are not on pills or drugs!!" Year after the other, more and more people became willing to rent their lands to the festival, and little by little not only did the owners of pubs and bars and restaurants start enjoying the profit they are actually making from metalheads, but they started appreciating their good manner, so that recently you'd start to wonder whether the festival is inside the town itself as through our experience in the last two years, when we played in the last edition of Metalcamp (2012) and the first edition of MetalDays (2013), whenever we go into town from the sunrise till late at night we'd hear Heavy Metal music pumping out form almost every restaurant and bar in town with lots of Metalheads hanging out. Such a gorgeous sight, to see Metalheads socialising in a very friendly environment, no one making any trouble, all having a good time, and at the same time being so friendly to nature... This IS a Metal Heaven.
Finally, it is very important to note the level of professionalism and efficiency the MetalDays crew and organisers have, how everything goes on smooth and extremely well organised.
On a personal Blaakyum note, we would like to thank the organisers, crew and volunteers, endlessly as no words can describe their unmatchable hospitality, the high quality of their service and extremely tasty food, the sweetness of communication, and the trip they gave us around Tolminska river valley. This will remain in the heart of every Blaakyum member, a memory of the beauty and sweet-heartedness of Slovenian hospitality and their amazingly efficient professionalism.