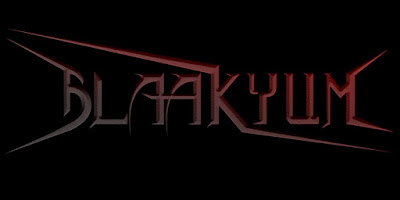 We have been through a lot the past three years to get this damn debut out... Let us say the circumstances were not on our side. Starting by the fact that Blaakyum has a long history and endless originals that lead to the first idea of having a double debut album consisting in total of 22 songs 11 from the early days of Blaakuym before 2007 and 11 tracks written after the late reformation of the band... Financially this was not possible. It was more practical and more logical to combine the two debuts in one album of 11 tracks that holds the best of both, and this is what happened and Lord Of The Night debut is on it's way to see the light.
Later in 2008 we were faced with a major lineup change: our beloved drummer Georgie Nadjarian (Communion/Blaakyum) whom I personally had been in a very pleasant music relationship for over 6 years had to leave the band because of his work contract in Music Hall. Mr. Elias El Rahbany (Ouchi) our guitarist left because of musical and personal differences... that left us without a drummer and lead guitarist for over a year and a half, many joined the band for some time and helped us keep going, and we would like to thank them, namely Hady Battikh (Guitars), Chris (from Element 26) and Marc Bassila (Drums), Blaakyum finally found it's best drummer Mr. Jad Faitrouni... but it wasn't till summer 2010 till we finally had Mr. Elias Njaim one of the most renown guitar virtuoso in the Lebanese Scene, joined the band. From then the recording process kicked off with speed and perseverance thanks to the patience of our production house New Waves Productions and it's lovely staff and mastermind Mr. Walid Al Massih.

We have already finished recording all drum tracks, guitars, bass and solos, few vocal parts, and we still have to lay the Keyboards and the final vocals and the record will be ready for the mix down, we hope our first debut will see the light by the New Year.

The Album is receiving a high level of production, and it sounds heavy as fuck, and we are so excited to share it with you, after all these years where Blaakyum showed a devastatingly aggressive and divers live shows, this record will be a parallel image of these frenzy live shows taken into the studio. It will be, just like Blaakyum is live, Aggressive Thrashy, and revolve around the term I love the most HEAVIOSITY without neglecting the soft part of Rock and the emotional slow rock tunes.
This record sums up Blaakyum's previous era, filled with diversity from Heavy Metal, Thrash Metal, Progressive Metal, Hard Rock and Soft Rock.

All of the above happened because of you, our fans... and for that we will be for ever grateful.

Cheers mates, and as ever we will... KEEP METAL ALIVE \m/

Bassem Deaibess from Blaakyum
Posted by Sir Black at 5:58 am No comments: