Blaakyum would like to Thank Metal Blast crew, friends and fans who made this concert a possibility, The band gave one of its best shows, and we were blown away by the enthusiasm of the fans, and we loved witnessing the Egyptian Moshpit \m/ - As we said on our facebook fan page:

"...We can't wait to tell Lebanon about the Egyptian Metal scene, you guys keep it together, and we will Rise. 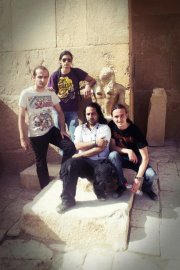 We would like also to say that the Egyptian bands, Karma and Wyvern are really great... Karma with its groove metal will definitely blow the minds of our Lebanese NuMetal fans, a very tight and ambitious band.
Wyvern, is a mirror of Blaakyum in Egypt, play a very similar style, being the oldest and having pass through the similar obstacles...

And last but not least Metal Blast crew, you guys are the Heroes of the Nile... And we will always be ready to cooperate with you, such high standard organization and professionalism... You kick some serious big fat fucking ass \m/

Egypt, we can say one thing: You Rock \m/

Blaakyum album is on Sale at Vibe's studio in dokki - Cairo and at Bikya Book Store.