Blaakyum is a veteran Lebanese Metal band. Conceived in the hot summer of 1995, five years after the end of the Lebanese Civil War, and reformed with a fresh new line-up in 2007 after seven years of hiatus, Blaakyum’s sound is a unique blend of Thrash, Heavy and Groove Metal infused with Middle Eastern and Levantine folk music vibes. 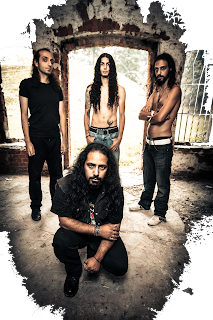 Hailing from turbulent Beirut, Blaakyum is Lebanon’s leading and longest established metal band. Blaakyum stands up against war and extremism in the Middle East with an original sound blending thrash, heavy and groove metal and infused with crushing Middle Eastern percussions and oriental guitars. The band followed up winning third place at Wacken Open Air’s Metal Battle 2015 with a critically acclaimed second album, “Line Of Fear” (2016), a European tour that kicked off at Tuska Open Air 2016, and a music video premiered exclusively by Metal Hammer. Blaakyum is now completing its third album, “Industry Of Death”.
The band’s sound pioneers “Middle Eastern Thrash”; it does not merely add Middle Eastern musical elements to Thrash Metal, but aims to make those oriental musical elements themselves sound heavy. This is a nod to the band’s origins and influences, coming from a country that straddles eastern and western civilizations on the south-eastern coast of the Mediterranean and with members inspired by Metallica, Testament, Overkill, Annihilator, Onslaught, Slayer and Iron Maiden, just to name a few, along with oriental music icons such as Fairouz, Sabah, Charbel Rouhana and Marcel Khalife.
The band was originally conceived in the summer of 1995, five years after the end of the Lebanese Civil War, when the Metal scene in Lebanon rose from the ashes. Blaakyum was at the forefront in the battle for proving that Heavy Metal can exist in the Middle East against all odds.
Winning the Lebanese Bands Competition in 1997, Blaakyum released its first single, “Am I Black,” in 1998, at the height of the anti-Metal witch hunt conducted by the Lebanese religious and political authorities, who considered anyone affiliated with the scene a national threat, and during which the band’s founder and frontman, Bassem Deaibess, was detained and jailed simply for being a Heavy Metal musician and fan.
Despite this, Blaakyum was one of the first Lebanese Metal bands to have their music played on national radio, and gathered a faithful following that is growing steadily. The band continues to score firsts in a region where Heavy Metal is normally relegated to the underground. Following its win at Wacken in 2015, it became the first Heavy Metal band to be featured in primetime national news in Lebanon, and the first Heavy Metal band to be interviewed live and have a song played on pan-Arab satellite television.
Lebanon’s dire economic conditions and a mixture of personal and health problems that hit the band’s members meant that Blaakyum was forced to split in 2001. Deaibess continued to perform with other bands but many of the Lebanese Metal scene’s members were forced to emigrate in order to make a living. In 2006, war hit Lebanon again, destroying much of its infrastructure (electricity, water, roads), which remains in disarray.
But by the end of 2007, Blaakyum was back with fresh new members that Deaibess picked from the talented new generation, and won the Lebanese Nationals in the Global Battle of the Bands (GBOB), representing Lebanon in London—the only Middle Eastern and only Metal band in the competition finals. Among 3000 bands that participated in the GBOB and 35 finalists, Blaakyum earned a respectable 7th place.
The following year, Blaakyum entered the studio to record its debut album, a process that took more than four years to be completed due to Lebanon’s deteriorating economy and the lack of Metal-friendly studios and rehearsal facilities. The band finally managed to release “Lord Of The Night” on Friday the 13th of January 2012.
Despite the revival of the anti-Metal witch hunt and Deaibess’s second detention, as well as the worsening political and security situation in Lebanon, Blaakyum set on the "Night Lords" tour that took it all over Lebanon as well as Egypt, and that made it the first independent unsigned Lebanese band to organize its own Eastern and Central European tour, performing in Metal Heads' Mission 2012 in Ukraine, MetalCamp 2012 in Slovenia, and playing gigs in Slovakia (Bratislava - Randal Club) and Poland (Warsaw - Progresja Club). Blaakyum subsequently performed on the main stage at MetalDays 2013 (formerly MetalCamp) and began working on its second album “Line Of Fear,” released on June 25, 2016 to rave reviews from around the world.
The Line Of Fear tour kicked off with a headlining show in Dubai and continued through a critically acclaimed performance at Tuska Open Air in July 2016 (making front page news on Yle, the Finnish national news broadcaster) before Blaakyum hit the road in support of Onslaught (along with Mors Principium Est and NO RETURN) for 16 days around Europe in September 2016. Blaakyum became the first band to perform a song jointly with Onslaught live on stage after being invited by Onslaught to perform on their song “Children of the Sand” from the album “VI”.


On August 19, 2016, Blaakyum’s music from “Line Of Fear” was part of the “Iraq Out & Loud” performance at the Edinburgh Fringe Festival, which won the festival’s panel prize. “Line Of Fear” is an album whose theme emerged from the band’s experiences with social and political oppression in Lebanon. It talks about freedom of thought and artistic expression, and the bonus track, Riot Against Riot, is a comment on Lebanon’s recent anti-corruption protests in 2015 that the band members were part of and that were met with violent crackdowns by the police. In April 2017, Blaakyum became the first Lebanese heavy metal band to have a music video premiered exclusively by Metal Hammer.
* * *