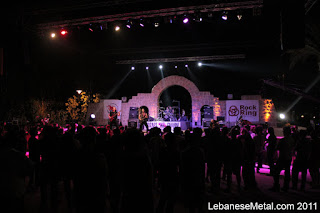 Blaakyum Will be going on Tour to support it's Debut release "Lord Of The Night". The tour will be divided in two parts. Egypt Concert, and the "First In Line" Tour that will take place, for the first time in Lebanon's History, across Lebanon.

It is to be noted that never in the history of Rock and Metal did a Lebanese band tour the whole of Lebanon, as in the past big concerts were being held strictly in Greater Beirut and Mount Lebanon, and to a lesser extent in Tripoli, while other areas in Lebanon were left neglected or had only it's local bands performing.

Blaakyum hope that this tour will open the gate for a wider national Rock music movement, and hope to encourage other bands to perform all over the Lebanese territories.
Confirmed Dates:

*More Dates will be added as soon as venues are booked in EUROPE, ASIA and around Lebanon: Bshare, Marjeyoun, Ain Ibil and definitely Beirut are among the places being booked
Posted by Sir Black at 11:25 am