Blaakyum performs Sepultura songs in a Sepultura "banned" concert, while the band watches from Skype 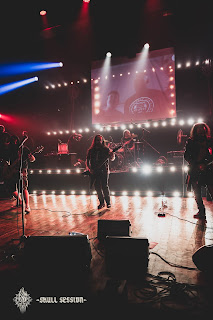 On April 28th, the Lebanese Metal Scene was promised to watch one of the most iconic Metal Bands of all times: Sepultura. Sadly the hand of oppression struck again. The Lebanese Authorities, cued by "hidden" forces, banned Sepultura members from entering the country based on baseless and ridiculous accusations of Devil Worshipping, and performing in Israel!
Blaakyum  is no stranger to discrimination, having our frontman detained and jailed a couple of times because of the music he listens to and composes. During that time Sepultura songs were his main escape from all the hell he had to face.
Blaakyum, and in an act of defiance against this unjust order of ban decided to perform three Sepultura songs: "Refuse/Resist" "Territory" and "Roots Bloody Roots", furthermore Bassem Deaibess, being the founder of Skull Session, and Rabih Deaibess asked Sepultura management if it was possible to make a Skype call with the band, so that Sepultura can see their fans in Lebanon, talk to them and watch the Metal Scene giving tribute to them.
Blaakyum also invited members of the other bands who performed on that night to join them on stage during their performance of "Roots Bloody Roots".

Right before Blaakyum performed "Roots", the four members of Sepultura addressed their fans in Lebanon,  "Hey Beirut, I hope you can hear us..." Andreas Kisser said to the enthusiastic fans who cheered loudly, some even in tears, "we are here in Istanbul, Turkey, unfortunately we couldn't be in Beirut this night, due to stupidity and ignorance, we've been travelling the world for 35 years and that never happened! But we are so pleased and so happy to see you all gathered to celebrate Sepultura's music. We would like to thank you all.. we would like to thank all the bands that were a part of this... this special night, and hopefully in the near future we can reschedule and rearrange a show for Sepultura in Beirut Lebanon. We love you very much. We're going to play in Dubai..." Continued Kisser, "We're going to play in Dubai on May 2nd, and we are going to do a special broadcast of the show, only for you guys actually, it's like a... we are going to dedicate the show to the Lebanese Sepultura fans and we are going to do this special broadcast from Dubai on May 2nd, so be aware, and hopefully you guys at least can enjoy a little bit of the show, but like I said, thank you very much for the support, we are all here [Sepultura members] together to say thank you and hopefully, we will see you soon. Thank you Lebanon."

While Sepultura's four members were still on the line watching their fans and the band perform, Blaakyum and handful of musicians from the Lebanese Metal Scene performed Roots, during that song Bassem Deaibess said the following:
"What are we going to tell [say] to Sepultura? We will see you in Lebanon again! Censorship is NOT democratic. What they have done is a shame on everyone who does not understand democracy. And the reason why this is happening is because none of us is saying anything. Silence means DEATH (quoting Sepultura). And we will not be silent again... Are you with us?"