This is Bassem Deaibess reporting to you live from the Alchemist Studios, where Blaakyum has deployed a temporary camp, working 24/24 around the clock to get the album mixing done before the 21st of this month so that it can find its way to the final mastering stage.

The Mastering Engineer name and Studio will be announced soon... But before that, we need to get the mix as good as possible. Now with the limited resources we have, we are doing a good job, opting to record everything in an analog like manner, not using any VSTs or Drum samples but rather recording the drums guitars and bass live was not an easy task, and it is true, you have to aim extremely high to get as close as possible to what you want. Sometimes I wondered why can't we get a killer sound like the ones in Master of Puppets, Black Album, Foundation of Damnation, and the likes... the answer is obvious though it has escaped me for too long, well, we do not have strong amps like for example the mighty Mesa/Boogie, for example: James Hetfield "discovered that utilizing the midrange frequencies straight from a modified Marshall amplifier, layered over guitar tracks of his trusty Mesa/Boogie MarkIIC+ as well as the Mesa/Boogie MarkIV, plus an ADA MP-1 preamp and a Mesa/Boogie Strategy 400 poweramp, he would get a much thicker and richer tone. He enhanced the frequencies by enclosing his four Marshall 1960B speaker cabinets with foam walls and U-Haul blankets, and carefully phase-canceled particular frequencies with eight closely-positioned microphones and two ambient condenser microphones." Ok so this is advanced alchemy... Nor do we have the all mighty Warhead Randall amps to use, add to it the fact that in the good old days overdubbing was required to achieve that heavy crunch, something digital recording has fucked up quite a bit in small studios...

So we had to be content with the few not bad equipments we have, specially the lovely little 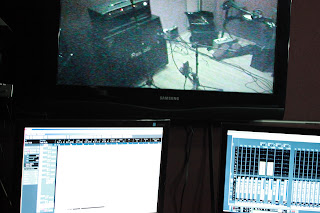 Randall RH50T Half Stack that was used to record all the rhythm parts. One little amp for the whole sound we want, almost was an impossible mission, so there we are, I have moved to the studio, spending all my time here, our engineer Mr. Karim Noujaim consecrating all his time and energy for the mixdown, band members join every now and then, work around the clock, this is so exciting, fun and exhausting... And we hope you will enjoy listening to our album as much as we enjoyed creating it, blending it, and bring it alive with the best we can... Hail to Heavy Metal, the mighty Iron Fist of the Gods